The Pioneer Saloon in Goodsprings, Nevada, about a 40 minute drive south of the Strip, is not your typical Las Vegas restaurant. A visit there includes some good food and fascinating history.

The Saloon/restaurant was built in 1913 and its interior and exterior walls are of stamped tin manufactured by Sears and Roebuck. It is believed that it is one of the last, if not the last, of its kind in the United States. 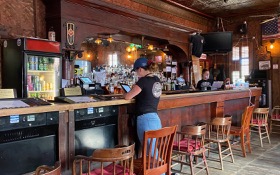 Many fictional movies have been filmed there, but the true story of two famous movie icons could be part of any movie script. In 1942, the plane carrying movie star Carol Lombard disappeared in the area. Clark Gable, her husband, waited for three days at the bar until he received the tragic news that she perished when her plane crashed at nearby Mt Potusi. Folks claim that Gable drank the entire bar dry while waiting.

Many believe that the saloon is haunted. It has been featured several times on the Travel Channel‘s ghost adventure series. Employees have reported hearing a woman’s sobbing voice in the ladies’ rest room. Some say that it is caused by the spirit of Carol Lombard or perhaps the spirit of a prostitute that was reportedly murdered in the room.

Unfortunately the bar area was closed due to the virus, but we were allowed to enter to snap some photos of the rustic interior.

Workers have often reported on sightings in the saloon. A gentleman was shot for cheating during a poker game and his spirit reportedly is a regular visitor to the saloon. Bullet holes in the walls of the poker room are evidence of the event. The spirit of a dead miner is also reported to haunt the saloon as well as the nearby city of Goodsprings.

My wife Dianne and I visited the Pioneer Saloon for both the rustic ambiance, and for the food. Since we visited the restaurant during the Corona virus crisis, the menu was pared down.. The saloon served food only on the large outdoor patio which made social distancing easy. The picnic benches were consistent with the western theme.

The menu is best described as basic Western American. The breakfast selection is large. It features the standard egg dishes with a Mexican flair. A wide variety of egg scrambles is also offered made with ingredients such as chorizo, jalapeño bacon, and honey bacon.The Pioneer saloon boasts of a wide variety of steaks and ribs, some of which we have enjoyed on previous trips.

Hamburgers are the house speciality and we could see why. The regular burgers are a half pound. They utilize a roasted gourmet potato bun which really enhanced the flavor of the sandwich. Dianne ordered the brunch burger which included hash browns and an egg along with the half pound burger. A really good combination. I opted for the Ghost Burger which contains a secret ghost sauce and jalapeno bacon. The burgers were really tasty. We couldn’t resist complimenting them with a side order of chili. It was meaty and not too spicy.

The Saloon has been host to bachelor and bachelorette parties, corporate programs, and late night Haunted Lockdown events. And where else can you go to a rest room with a photo of Clark Gable on it.

A visit to The Pioneer Saloon is a great diversion from the hustle and bustle of Vegas. It is located in an area of Nevada that most tourists do not visit. Consider coupling a visit to the Pioneer with the unique experiences of Adrenalin Mountain Extreme Entertainment Complex, just minutes away.

The food at the Pioneer Saloon is hearty and all American. We plan to return to enjoy other menu selections there. 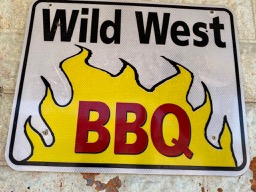 March 21, 2018 Dianne Davis Attractions 0
The team behind the award-winning Modernist Bread book announced the subject matter and name of their next book: Modernist Pizza. The announcement was made during an event at Modernist Cuisine Gallery at The Forum Shops inside Caesars Palace, which […]

May 23, 2020 Stephan Martin Restaurant Reviews 0
The long wait to dine out, have a handcrafted cocktail to go with an incredible atmosphere is finally over. Slowly restaurants are beginning to open up and allow diners to sit down and experience that […]

July 22, 2019 Dianne Davis Entertainment 0
The Pegasus Showroom is small, but the talent is big. Kelly Clinton-Holmes and Elisa Fiorillo deliver a delightful show filled with music, songs, laughter, energy, Vegas pizzazz and of course the mandatory wardrobe changes. The […]